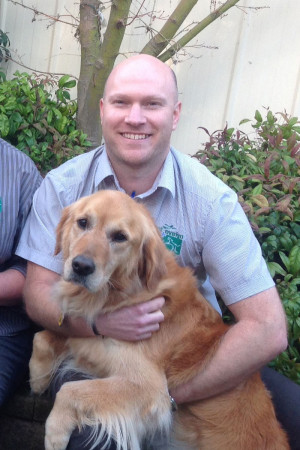 Nick joined the team at Mt Evelyn Veterinary Clinic and Animal Hospital in 2002, and apart from a 3 year break to travel and work in the United Kingdom, has been here ever since.  He became a partner in 2014.

Nick studied Veterinary Science at the University of Melbourne, graduating in 2001. Nick enjoys all aspects of being a vet, but is particularly interested in dentistry and emergency medicine.

Nick and his wife Allison have 3 kids, Liam and twin girls- Stephanie and Alicia. They have a brown Burmese cat, Boston, who is very pretty but rarely does as he is told (some may say a typical Burmese!). Milamber is their gorgeous Golden Retriever who you may come across at the clinic. Milamber helps out with our PetPEP program, visiting local schools educating about responsible pet ownership and safety around pets.

In his spare time, Nick enjoys skiing, soccer and running.